Scotland’s amazing stable of long-distance walks has been given another boost with the launch of its longest ever walk. The Gore-Tex Scottish National Trail stretches an amazing 470 miles from the south of Scotland to the far north west. 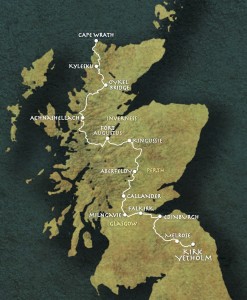 Launched earlier this week in Edinburgh – where the walking route passes through – it is hoped that the new walking route will put Scotland firmly on the radars of even more overseas visitors.

The trail is the brainchild of writer and broadcaster, Cameron McNeish. Reported in Scotland’s national newspaper The Herald, Cameron said: “I wanted to re-discover my country for myself, especially those areas I wasn't so familiar with, and in doing so walked a route I believe can stand comparison with the best routes anywhere in the world."

His website adds: The Gore-Tex Scottish National Trail will become “one of the iconic walking routes of the world” thanks to a combination of variety and quality of walking through the Scottish landscape.”

Starting in Kirk Yetholm the route heads first for Scotland’s capital Edinburgh before walkers take canal paths west towards Milngavie, near Glasgow. The route then goes north towards Aviemore.

The final section of the walk stretches almost 120 miles from Badenoch to Cape Wrath, much of it following the existing Cape Wrath Trail.

Other trails followed as part of this longer route include the Rob Roy Way from Drymen to Pitlochry in Perthshire. This is an area that Glentrek knows really well!

The route will not have its own waymarkers, except for new plaques at Kirk Yetholm, the Water of Leith Visitor Centre in Edinburgh and Cape Wrath.
Posted by Glentrek at 04:47

Glentrek
Angus Glens, Scotland, United Kingdom
Glentrek specialises in walking, mountain biking and multiactivity holidays in the beautiful Angus Glens in Scotland. The company is owned by outdoors enthusiast Janey Andrews, whose aim is to make the great Scottish outdoors as fun, accessible and hassle-free as possible for customers.